Amid this global pandemic that has traversed between all classes, races and cultures, Inside-an-airport has taken the initiative to organize the Greatest Quarantine Art Expo. The artists have been asked to share their quarantine artworks. The only criteria was that the works should be made during this global pandemic within or without the artists’ living space.

Quar·an·tine  /ˈkwôrənˌtēn/
a state, period, or place of isolation in which people or animals that have arrived from elsewhere or been exposed to infectious or contagious disease are placed. (-dictionary.com)

The great Tajik/Iranian physician Ibn Sina or Avicenna (ابوعلی سینا) was the first to designate a method to avoid contagion through 40-day sanitary isolation. He called the method “al-Arba’iniya” (the fortieth). (Guclu) Venetian merchants who had been trading with the Islamic world for centuries used the word “quarantena” in their own language. From Venetian, “quarantena” was eventually adopted by other Western languages. Between 1348 and 1359, the Black Death wiped out an estimated 30% of Europe’s population, and a significant percentage of Asia’s population. Such a disaster led governments to establish measures of containment to handle recurrent epidemics. (Sehdev, Paul S. (2002). “The Origin of Quarantine”) Such diseases was a background to the killing of almost 90 percent of the indigenous population of the Americas when Europeans came in contact with them through colonization centuries. (Source) Europeans brought measles, smallpox, influenza and the bubonic plague across the Atlantic, with devastating consequences for the Indigenous populations. (-nlm.nih.gov) (PRI)

The exhibition has been organized by the current T̶H̶I̶S̶ ̶W̶O̶R̶K̶S̶ ̶D̶I̶F̶F̶E̶R̶E̶N̶T̶L̶Y̶ organizers; Hami Bahadori and Rose Reyes. It was conceived shortly after the breakout of the COIVD19 pandemic and the conception of inside-an-airport weekly online Happy Hour meetings with artists and activists. 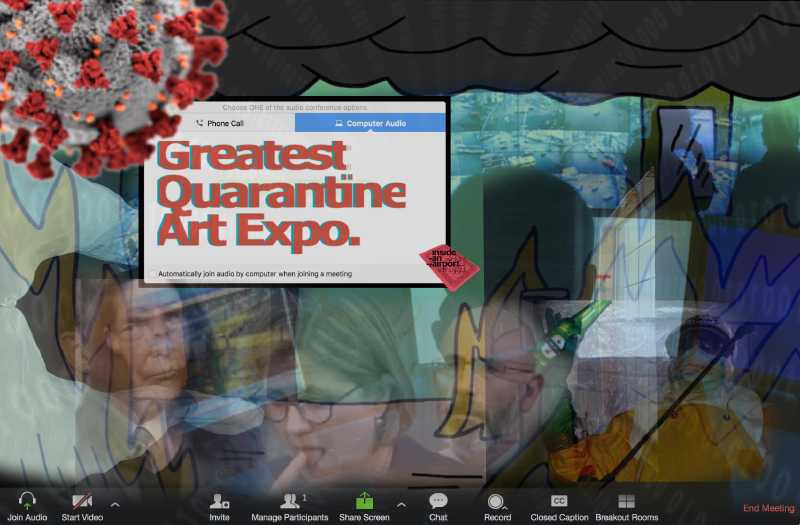