(Organized by RED MAY)

Join RED MAY as we welcome Michael Hardt who will present Assembly, his latest collaboration with Antonio Negri.

From the jacket blurb: “ASSEMBLY proposes how contemporary social movements can better harness power to effect lasting change; challenges the assumption that social movements must return to traditional, centralized forms of political leadership; provides a new analysis of the dominance of finance and money; advocates social unionism, or mixing labor organizing with social movements.”

“Are you ready for democracy? ”

Assembly argues: “don’t be scared to remake it.”

Michael Hardt, widely considered one of the most articulate and creative thinkers/writers on the Left these past twenty years, has done so from a base of Duke University, where he is a professor of literature. But he is also, part of the year now, calling Seattle home. With Antonio Negri, he has written a trilogy of Empire, Multitude, and Commonwealth; and Declaration. He is here this evening with the newest of their joint volumes, Assembly (Oxford University Press).

“Are you ready for democracy? Assembly argues: don’t be scared to remake it. Disturbing the tendency of resistance struggles to become hamstrung by a poverty of organization, Hardt and Negri throw question after question at left political habits and traditions of thought, imagining a New Prince from the multitude and new tools for self-governance. Some of their many propositions may seem questionable and some viscerally right, but all are thoughtful, potentially revelatory, fuel.” — Lauren Berlant

“A smart and in-depth examination of Marxist politics for a new century… [Assembly] is a fascinating, challenging theoretical journey into a future beyond capitalism.”–Publishers Weekly 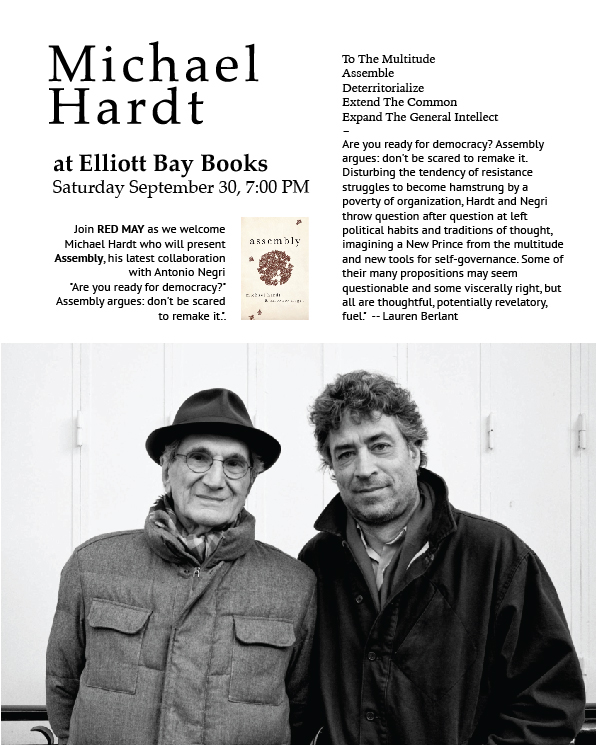